2017 marks the 25th anniversary of the publication of A Manual on the Rudiments of Tuning and Registration by the Schiller Institute. This groundbreaking work under the direction of Lyndon LaRouche, launched a controversy and discussion on returning to a scientific tuning for music, based on a Middle C equal to 256 cycles per second (A=427-432). The bel canto method of Italian vocal instruction presumes this tuning, and composer Giuseppe Verdi made sure to introduce into the Italian legislature a law to maintain an approximation of the scientific tuning (today in his honor referred to as the "Verdi Pitch"). 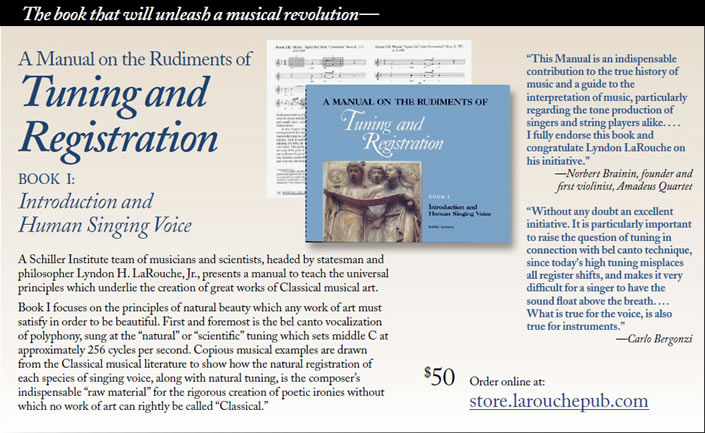 It is the commitment of the Schiller Institute NYC Chorus to restore this Italian bel canto tradition in the United States, starting with Manhattan. This is also the reason for the rather uniquely warm and full sound of our chorus, which will continue to develop over time.

As the Schiller Institute begins the next phase in its campaign to build a 1500-person community chorus in New York City, we will begin to offer periodic discussions and demonstrations associated with the Manual on the Rudiments of Tuning and Registration. Both non-professional and professional musicians and singers, as well as those interested in the implications of the matter for all related areas of physical science, are welcome to attend.

John Sigerson, a co-author of the Manual, and director of the recent four Mozart Requiem performances presented in New York City, will give two Friday talks, September 30th and October 14th. Suggested admission price is $15 per seminar, or $25 for both (student rate is half of the suggested admission rate). Pre-registration is recommended using the form below. Everyone who signed up to join the Schiller Institute New York City Community Chorus is especially encouraged to attend.