Along with pioneering the song cycle as an art form, Beethoven emphasized early on the role of the human singing voice in his instrumental music.

"Cantabile" is an Italian word meaning "singable" or "songlike" and this could indeed be thought of as a song without words.  The “Adagio Cantabile” from his Opus 13 “Sonata Pathétique” is one of the best-loved themes in the musical world.  At the time it was composed, the word “pathetic” did not mean miserable or pitiable, it rather meant emotional or heartbreaking. The sonata was composed in 1798, when Beethoven was 27 years old, and its publication the following year brought Beethoven immediate acclaim.

The pianist and composer Ignaz Moscheles related that when he discovered the work in 1804 at the age of 10, he couldn’t afford to buy the music, and instead copied it from a library copy.  His music teacher was alarmed, and “warned me against playing or studying eccentric productions before I had developed a style based on more respectable models. Without paying heed to his instructions, however, I laid Beethoven's works on the piano, in the order of their appearance, and found in them such consolation and pleasure as no other composer ever vouchsafed me." 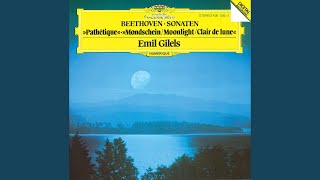