Although sketches for the Third Piano Concerto date back as far as 1796, it’s now believed that Beethoven composed the bulk of the concerto in the autumn of 1802, in the creative explosion that followed the Heiligenstadt Testament and the new method of composition that he announced with his Opus 34 and 35 variations.

The work was premiered in April of 1803 with Beethoven himself as soloist, playing from a score which his perplexed page-turner described as “almost nothing but empty leaves… He gave me a secret glance whenever he was at the end of one of the invisible passages and my scarcely concealed anxiety not to miss the decisive moment amused him greatly and he laughed heartily at the jovial supper which we ate afterwards.”

The concerto itself is in the key of C-minor, the platform on which Beethoven composed some of his most powerful and expressive works. It’s performed here with score by Martha Argerich. 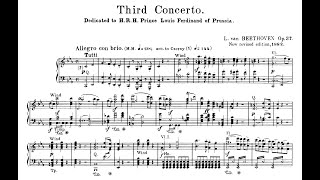