by Dennis Speed and Diane Sare

I do not like to talk about my mass, or, generally, about myself, but I believe that I have treated the text as it has seldom been treated before.

June 18—Although the June 12 United States/North Korea Summit in Singapore was still two days away, the intention of the Schiller Institute’s June 10 concert, entitled Dona Nobis Pacem: 1968-2018, prepared the 450 persons in attendance, and the 150 choral and orchestral members performing, not only for that impending, successful shift of history, but for the possibility of similar changes in the immediate future. The revolutionary thinking required to make such breakthroughs is the subject of Beethoven’s Mass in C Major. The Schiller Institute NYC Chorus and Orchestra has begun a study of this work, and presented its preliminary findings on it in performance.

As Music Director John Sigerson pointed out in the program essay he provided for the occasion, “A Concert Dedicated to the Spirit of RFK, Beethoven, and the New Paradigm”:

Indeed, Beethoven once commented to a friend that if people took seriously the discovered principles embedded in his compositions, warfare within and among nations would become an impossibility.

The Schiller Institute has embarked upon a mission to present little-performed, but important, Classical compositions that are generally considered outside the competence of amateur choruses. They are, nonetheless, essential to the cultural literacy of all thinking American citizens. The Institute also seeks to perform such works, whenever possible complete with orchestra, at the scientific tuning of C = 256 cycles per second. No one else in America is presently doing this.

It had been proposed three years ago by Institute co-founder Lyndon LaRouche to recruit, in New York City, a 1500-person chorus which studies the Italian bel canto voice-placement principles and, based on the insights thus gained, begins to “think like Beethoven.” Beethoven’s hypothesis, that his music, properly understood, can stop war, should be rigorously tested “in the street” through the social practice of choral presentation. This is particularly necessary at this time, when the United States so desperately needs to instantaneously change course and abandon the culture of death that has temporarily gripped the nation, but which runs counter to its original national purpose and mission.

This concert is the conclusion of a conference that began yesterday, held in the context of a national state of reflection upon the 50th anniversary of the double assassinations of Martin Luther King and Robert F. Kennedy. Ludwig van Beethoven’s Mass in C Major is the featured musical commentary we offer upon this occasion. As pointed out by conductor John Sigerson in the program, Beethoven, while composing the “Dona Nobis Pacem” section of the Missa Solemnis, the Solemn High Mass, wrote in his sketch-book: “Strength of sentiments of inner peace above all else . . . Victory!”

“Death is swallowed up in victory! O grave, where is thy victory? O Death, where is thy sting?” says Saint Paul. So says Beethoven also, and so say we today, reflecting upon Martin Luther King, Robert Kennedy and many others. Paul also, however, adds, in a passage that some find mysterious, “For the sting of death is sin; and the strength of sin is the Law.” Is it not a law, that all of us must die? How can we then be truly free? Friedrich Schiller, in his various discussions of the Sublime, points out that “even the beautiful must die” and that if man is not fully free from the tyranny of death, then he is truly not free at all. Life itself would then be a tragedy.

But it is not. Our lives are not contained within our skins, our exteriors. Through creativity, our lives are contained not only in some other human beings, but in all of humanity, all of creation itself. We represent not only a physical presence in the world, but a principle of creation simultaneously contained within but also beyond the physical world as such. That universal principle is growth, and it is manifested in all things as progress. Its human manifestation is called wealth. It is from the ennoblement of the mind and character of mankind, that all other permanent forms of wealth, including the physical well-being of the whole human race, will flow. The real poverty of our time begins with a poverty of the soul. That poverty of soul, and its accompanying physical poverty, is not an inevitable objective condition, but a thoroughly unnecessary subjective choice.

After the invocation, delivered by St. Anthony of Padua’s Father Mario F. Julian, the concert was begun by violinist Brenden Zak, 19 years of age, who played the “Andante” section of Bach’s Violin Sonata No. 2 in A Minor.

Speed then introduced two speeches, given within 24 hours of each other, by Martin Luther King and Robert Kennedy, on April 3 and April 4, 1968. Both speeches were prophetic. King’s “I’ve Been to the Mountaintop” is one of the most quoted and best known in American history. Kennedy’s extemporaneous speech the evening following King’s assassination, is one of the least. Kennedy’s two references to Aeschylus, the Greek tragedian of 2,500 years earlier, were essential to his changing the despairing direction of thought of the African-American audience to whom he spoke that night in Indianapolis, showing, as did King’s “Gethsemane” speech of the night before, the power of immortality over death.

The African-American Spirituals, Ain’a That Good News, arranged by William Dawson, and Honor! Honor! arranged by Hall Johnson, followed, conducted by Diane Sare. Sare has worked over the years with Johnson’s close associate Eugene Simpson, who provided crucial commentary and biographical material on Johnson for the Program, and is the author of Hall Johnson: His Life, His Spirit, and His Music (Scarecrow Press, 2008).

“Poverty is a form of violence” was the title of the next section’s Kennedy/King remarks, read by Speed. The excerpt, taken from Kennedy’s April 5, 1968 Cleveland address, “The Mindless Menace of Violence,” unaltered, could have been as productively stated today:

Some Americans who preach nonviolence abroad, fail to practice it here at home. Some who accuse others of inciting riots, have by their own conduct, invited them.

Some look for scapegoats, others look for conspiracies, but this much is clear: violence breeds violence, repression brings retaliation, and only a cleaning of our whole society can remove this sickness from our soul.

For there is another kind of violence, slower but just as deadly, destructive as the shot or the bomb in the night. This is the violence of institutions; indifference, and inaction, and slow decay. This is the violence that afflicts the poor, that poisons relations between men because their skin has different colors. This is a slow destruction of a child by hunger, and schools without books and homes without heat in the winter.

This is the breaking of a man’s spirit by denying him the chance to stand as a father and as a man among other men. And this too afflicts us all.

The chorus brought this section of the program to its conclusion with three Spirituals: Lord, I Don’t Feel No-Ways Tired and I’ll Never Turn Back No Mo, arranged by Johnson; and Daniel, Daniel, Servant of the Lord, arranged by Undine S. Moore.

How Is It Possible?

In addition to the excited responses she received to the choral performances overall, conductor Diane Sare reported:

The church was filled with people who had heard about the concert in many different ways. Many members of the audience had been members of the chorus in past performances and therefore follow the chorus closely. About two thirds of the audience had attended previous events sponsored by the Foundation for the Revival of Classical Culture, featuring the Schiller Institute NYC Chorus. Many people came from the powerful images on the poster, which they had seen somewhere. The Harlem Opera Theater, directed by Gregory Hopkins, got the word out to its audience, many of whom attended. The audience very much reflected the diversity of the chorus.

Sare pointed out that while soloists Sarah Abigail Griffths (soprano), Linda Childs (alto), Gregory Hopkins (tenor) and Paul An (bass) stood out in this day’s performance, it was the development of the “richness of sound” of the chorus—what some musicians have referred to as the “warmth” of the voices—that was most distinct. When tenor Reginald Bouknight sang his solo parts for three of the five African-American Spirituals presented by the chorus, the unity of effect achieved by the contrast between his “call,” and the chorus’s “response,” was greatly assisted by the proper tuning of the voices.

The answer to the often asked question, “How is it possible for the Schiller Institute’s musical efforts and performances to be distinctly superior to many professional and nearly all other non-professional choruses in the United States?” does not lie in the musical training, practice, choral personnel selection, or the music itself. It lies behind, underneath, and above the music. A 45-year emphasis by Lyndon LaRouche on the role of Classical composition, particularly Beethoven’s compositional method, in clearing the mind to establish necessary mental conditions for true original creative work, has informed the work of director John Sigerson.

Sigerson, as a vocalist, instrumentalist, and a member of the team that worked with LaRouche in the 1980s to produce the book, A Manual on the Rudiments of Tuning and Registration: Introduction and Human Singing Voice, helped to rediscover the scientific basis for the tuning of all musical instruments in congruence with the human voice, and the entire “vocal registral palette” ranging from soprano to bass. This application of and experimentation with the bel canto methods well known during the time of the Italian Renaissance, is informed by the far more advanced compositional principles of Beethoven; this provides an intention, a “reason for being” for these particular performances, which are done as proofs of principle, not as “highbrow entertainments,” or as “cultural wallpaper,” mere background for purposes completely unrelated to music. 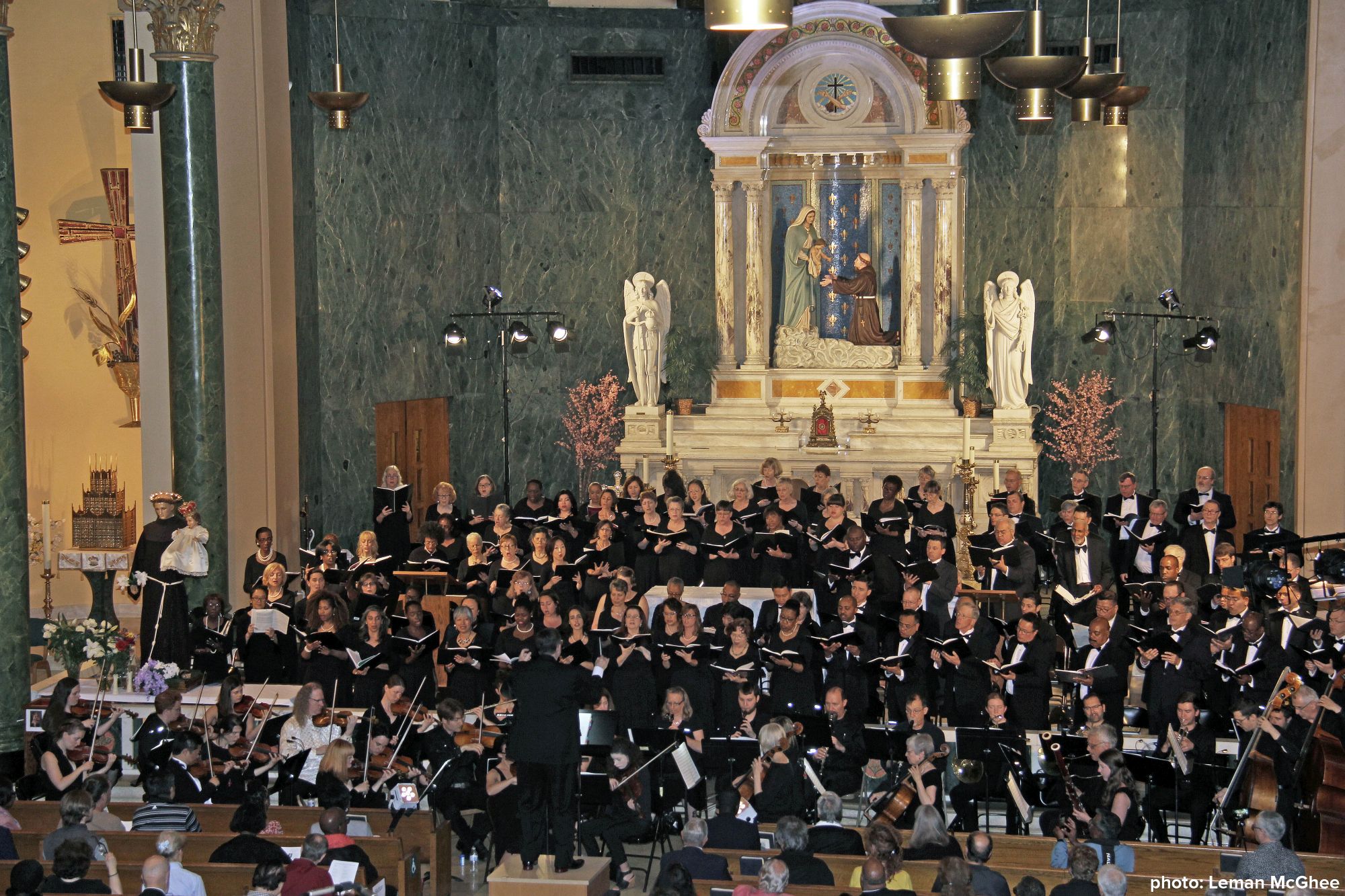 Classical Composition Is a Way of Life

The method of Classical composition is not a technique, but a way of life. It is the essential tool by means of which human immortality may be deployed as an efficient ordering principle, properly evaluating the importance and the role of truth in the day–to-day affairs of life. The matters of our lives, and our decisions, are thus raised to the level of current history, as opposed to being relegated to the non-existent, wholly illusory realm of “current events,” forgotten almost before they occur.

For citizens who would save their nation and civilization, by building something new and unprecedented with the people of Asia and the world, these concert studies and performances are “experiments in truth,” much like those carried out by Mahatma Gandhi and Martin Luther King: They are the highest expression of “creative non-violent direct action”—but action on the minds of the participants. This supplies an urgent, sometimes even unconscious, sense of mission for the participating vocalists and instrumentalists—all transformed into musicians—that is unavailable to nearly all conventional ensembles. This precedes each performance, and determines each performance’s success.

We now stand poised upon the threshold of a new cultural paradigm, expressed in the worldwide economic revolution called the New Silk Road. It is in fact a victory secured through the decades of the relentless composing, and work of Schiller Institute Founder Helga Zepp-LaRouche, and her husband, economist Lyndon LaRouche. And the living musical metaphor of that new cultural paradigm is the struggle and triumph of the deaf Beethoven, the deaf composer who knew and proved that music fundamentally exists in an unheard realm, behind, beneath and above the notes.