Holiday Concert & Sing-along at St. Veronica's in the Village

On December 22, 2019, as the end of the year approached, our the Schiller Institute NYC Chorus presented a Holiday Concert & Sing-along at St. Veronica’s Cultural Center in the Village. We produced the Program as a Song Book so that everyone in the audience had their own music to sing and to take home.

Chorus director Diane Sare described in her remarks the way in large choruses were created in 19th century New England by providing groups from town to town with the same songbooks, so that people could come together on occasions into large choruses of hundreds of singers. 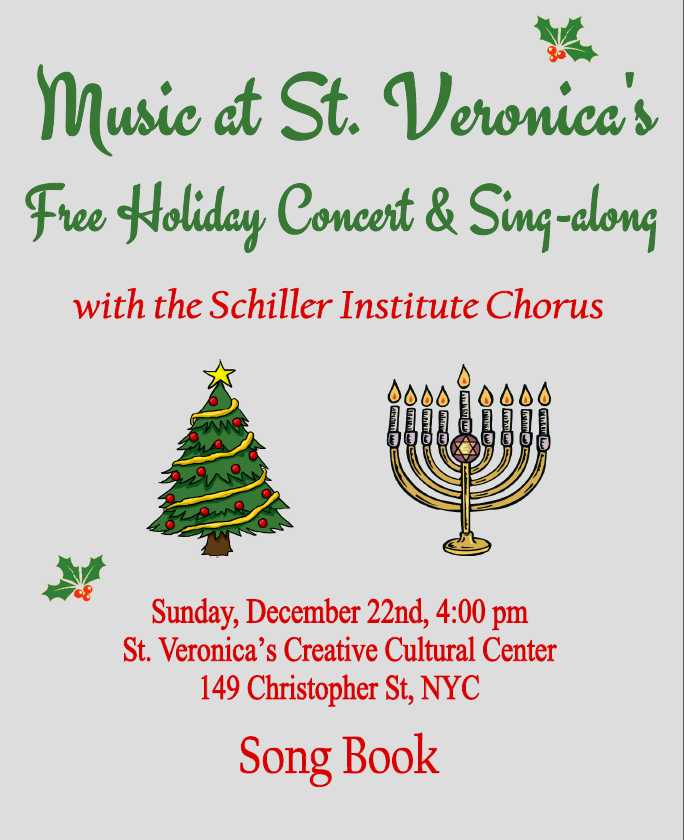 The Concert began with solo and choral selections by the chorus, O Come, O Come, Emmanuel followed by selections from part I of Handel’s Messiah. Artistic Director and tenor John Sigerson sang Comfort Ye and Every Valley. Soprano Michelle Erin sang Rejoice. Then the sing-along
section began with ten Christmas and Chanukah songs. Each song was sorted out so that some verses would be sung by the audience alone. The chorus sang two more carols alone, and then the finale with everyone singing the Hallelujah.

Many were able to follow along with the score, and some came in and out, but all had tremendous fun, and spirits were high for the reception. With an appeal to the audience to consider joining the chorus, several became good prospects to join in the next season.