Notice on the Daily Beethoven

The ongoing location of the Daily Beethoven is our Facebook page:
https://www.facebook.com/schillerchorusnyc

This was started as a text & email blog by chorus member Margaret Scialdone who has written this daily since the March 2020 (!) Covid lockdown hit the musical performance world particularly hard, right in the midst of the Beethoven 250 year celebrations. Schiller Institute founder, Helga Zepp-LaRouche said that people should find ways to listen to Beethoven daily to maintain our sense of humanity in this isolated condition.

Here are the important and beautiful remarks of Ricardo Muti before the recent Chicago Symphony live performance of the Beethoven Eroica Symphony no. 3. “Without culture the world becomes savage.”

YouTube | Chicago Symphony Orchestra
Riccardo Muti addresses the audience at Symphony Center
In this context, here is today's relevant Daily Beethoven. We hope you will continue to spread the word and follow this on our Facebook page, as well as continue to generously support our chorus.

Your Daily Beethoven (and friends)
Among the eleven extant recordings of Furtwängler conducting Beethoven’s Fifth Symphony, the recording of the 1943 performance in Berlin is the most famous, conveying both unspeakable anguish as well as the unshakable faith that humanity would ultimately prevail.
In his closing remarks at his sham “de-nazification” trial, Furtwängler said: “I knew Germany was in a terrible crisis; I felt responsible for German music, and it was my task to survive this crisis, as much as I could. The concern that my art was misused for propaganda had to yield to the greater concern that German music be preserved, that music be given to the German people by its own musicians. These people, the compatriots of Bach and Beethoven, of Mozart and Schubert, still had to go on living under the control of a regime obsessed with total war. No one who did not live here himself in those days can possibly judge what it was like. Does Thomas Mann [who was critical of Furtwängler's actions] really believe that in 'the Germany of Himmler' one should not be permitted to play Beethoven? Could he not realize that people never needed more, never yearned more to hear Beethoven and his message of freedom and human love, than precisely these Germans, who had to live under Himmler’s terror? I do not regret having stayed with them.”
https://youtu.be/GJG5A-klfgE
Beethoven - Symphony No 5 - Furtwängler, BPO (1943) 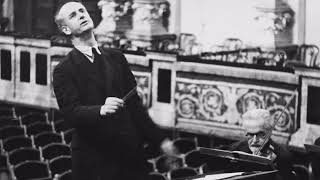