The invitation to the concerts, and to a conference sponsored by the Schiller Institute in Manhattan on the afternoon of September 10th, read: "This September, as the United Nations opens, let all those who abhor violence and war, drop their differences and come together in a solemn recognition of what is human in all of us. Let Wolfgang Amadeus Mozart speak in the language of music to our hearts, and to what Abraham Lincoln called 'the better angels of our nature.'"

Printed on the invitation was a picture of the "Tear Drop Memorial," a powerful ten-story sculpture built in Bayonne, New Jersey, overlooking Ground Zero across the Hudson River. Dedicated "To the Struggle Against World Terrorism," the memorial was a gift to the U.S. and the world from Russia after 9/11. The dedication ceremony, on September 11, 2006, was attended by President Vladimir Putin.

The event on September 11th itself will live in history. Every year since 9/11, the Co-Cathedral of St. Joseph in Brooklyn has sponsored a march from Ground Zero, across the Brooklyn Bridge to their beautiful Cathedral for a Mass honoring those who died and those who were otherwise affected. Many of the hundreds of firemen who gave their lives to save others as first responders at the World Trade Center were based in Brooklyn. This year, for the first time, the Bishop invited the Schiller Institute New York City Chorus to actually join in the Mass itself, through the performance of the Requiem. The powerful and moving performance was broadcast live on the Diocese TV network.

In total, over 3,000 people attended the 4 different performances of the Requiem. 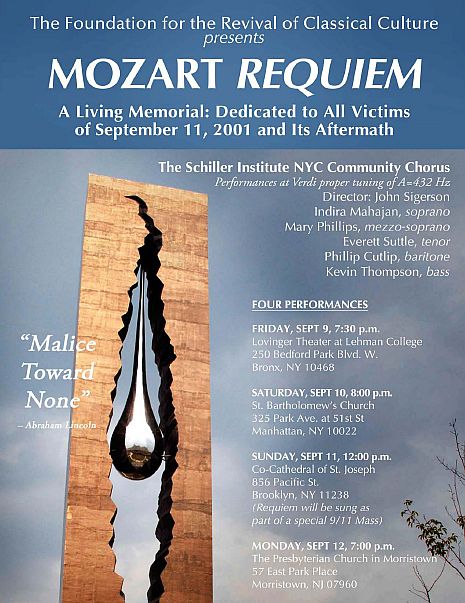 PDF of full concert program may be DOWNLOADED HERE

Executive Intelligence Review: "A ‘Living Memorial’ for All the Victims of 9/11"

The Tablet: "Mozart Adds to Local Sounds of Remembrance"