By 1798, Beethoven was ready to take up the string quartet, a genre already developed to a high art by Haydn and Mozart. Beethoven had copied out and intensively studied his predecessors' works, and after about two years and countless sketches produced a set of six string quartets published as Opus 18.

Opus 18 no. 1 in F Major is especially known for the second movement, in which, according to letters exchanged with his friend Karl Amenda, Beethoven sought to depict the tomb scene from Shakespeare's Romeo and Juliet, confronting tragedy head-on. It's played here by  the GoYa Quartet Amsterdam: https://youtu.be/hbS6ndtWi1E 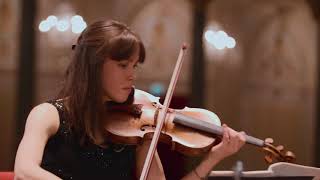