Although composed in 1810 and formally classified as the last of the “middle quartets”, the Opus 95 “Quartetto Serioso” (as Beethoven called it) has much in common with the “late quartets” composed more than a decade later.

It’s an extremely intense and compact work with many jagged edges and harsh contrasts; Beethoven described it as having been written for “a small circle of connoisseurs” and that it was “never to be performed in public”. He dedicated it to his close friend, court counselor and amateur cellist Nikolaus Zmeskall.

Here is a remarkably good recording of the Busch Quartet from 1932:
https://youtu.be/QqA1cM4OQMs 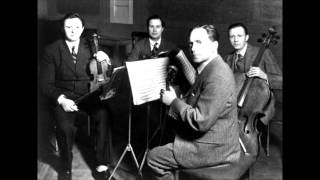