Beethoven’s “Razumovsky Quartets” took the string quartet out of the salon and onto the concert stage, no longer to be considered "light entertainment".

The second Quartet opens with a symphonic call to attention and launches into a dense exposition using remarkable economy of musical material – comparable to the Fifth Symphony, which Beethoven was sketching at the time. The second movement opens with a hymn, which is then developed in an Adagio which according to Czerny was composed while Beethoven was gazing into the starry sky and contemplating the music of the spheres. The “thème russe” is introduced in the third movement, in which folk song and strict counterpoint repeatedly collide. The concluding Presto movement is again symphonic in scope.

These quartets, although received with some consternation st the time, are now among the most popular of Beethoven's works. Here is Opus 59 no. 2 performed by the Emerson String Quartet. https://youtu.be/XGnck64iWuY 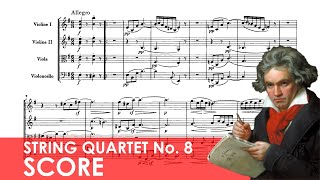